This is a great game... i have enjoyed a lot... have some glitches but just minor details... IMO is a great game to play with friends... i think that is better than ArmA II the controls and the control of the units are way better and have soo much fun =D

This could have been a great game.. if it had been released 8 years ago. Unfortunatly Bohemia's Operation Flashpoint was released in the 2001 and this game shares only the title with it.
Due to the fact the consoles have few keys or buttons, programmers must created absurd interfaces to make a complicated game.... playable. I admit I, and the other millions of players, am used to the original OFP interface. The hell, it works! Infact ArmA 2 has the same key combination to issue orders. With the OFP2 interface it is impossible to command the armies of AmrA, infact you could command only few men (4!) for most of the game!
Sounds are very good, great artilley effects, graphic is irrelevant as always.
The most positive point is that the 1.0 release is quite bug-free, a tru miracle for a PC game today.
To resume the situation: OFP2 is a simple console game, leave it to them. 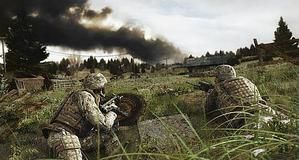