Popping up in late July, we're already well aware there's a Pathologic remake coming our way. But just how close is it? Well, you'll be able to play a 'vertical slice' later today.

I know that we’re drowning in horror games right now, but think back to the mid 2000s. Resident Evil was still king, but it had just gone toward action. Penumbra was about to start on the long road toward an indie horror boom. Meanwhile, a bizarre Eastern European title called Pathologic was making waves with its surreal setting and early attempt at survival gameplay.

Released back in 2005, Pathologic blended psychological horror elements with a real-time story structure that had you trying to discover the source of a mysterious plague.

I'm always up for seeing what Ice Pick Lodge is doing with its Kickstarted surreal horror-adventure remake Pathologic, in which you play a plague doctor trying to combat a strange disease working its way through the population of a remote town.

The Kickstarter campaign for Ice Pick Lodge's Pathologic remake has made its target of $250,000 with six days left go. It's currently sitting pretty on $264,998.

This new first-person, open world version of the studio's cult 2005 adventure game is set to come out in 2016. Now it's just a matter of how much additional content will be added through stretch goals. 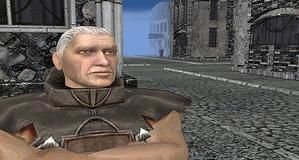