This year, football really is the winner.

PES 2018 Is Going Heavy On The Realistic Reactions This Year

For years now, two competing football/soccer sims have been at each other's throats. Despite PES being judged the more accurate, enjoyable experience over FIFA, it's undoubtedly the branding that secures the win when it comes to sales.

A production team dedicated to the Pro Evolution Soccer series has been founded in the UK by Konami, which they call a "large-scale commitment" to fostering European developer talent.

The new UK studio will "strive to adopt and recreate" local club culture to ensure PES is "kept fresh and exciting." They'll be holding a recruitment drive at GDC in Cologne, Germany.

Murphy: "Automatic assumption" now that FIFA is better than PES, are copycats

Jon Murphy, Konami's European team leader for PES, has said that while there was a "period of dissatisfaction" with PES for good reason, now it's because EA marketing has 'duped us'.

The PES franchise hasn't been "given proper respect" for returning to quality, said Murphy, because "so many have bought" into EA's PR. Also EA 'copy' the PES formula.

Konami are releasing DLC for PES 2012 which adds a dedicated Copa Santander Libertadores game mode, with features all 38 team 'enhancing' the game's license of the group.

It includes a dedicated roster and the official ball of Copa Santander Libertadores, bringing the 2012 competition "fully up to date." There have also been 'selected parts refined' by the DLC.

This occurs if the spring button is held for more than a couple of seconds, but only appears to affect player one's controller. November will fix the blighter. 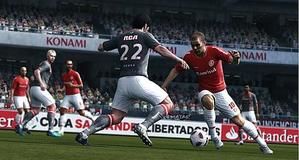