Konami has announced that they will be releasing a free-to-play version of their soccer title Pro Evolution Soccer 2016, which will include an Exhibition Mode complete with the choice of seven teams including Bayern Munich, Juventus, AS Roma, Brazil and France. It will also have the full Training section and myClub feature.

Konami has revealed what will be included in Data Pack #2 for their soccer sim Pro Evolution Soccer 2015. The free DLC will include new players, player likenesses and other cosmetic additions.

Konami has announced the first major free update for Pro Evolution Soccer 2016, which will arrive this Thursday, 29 October 2015. According to the publisher, "The update file will be automatically downloaded and added to the main game, with all team rosters updated in line with current registered squads," and this update will be the "first of many" over the course of the year.

There are concerns over the PC port of Konami's footy sim Pro Evolution Soccer 2016. Mixed user reviews on the Steam page and the fact that we are yet to receive review code for the game do not bode well. A NeoGAF thread sums up the issues nicely including graphical comparisons to the PS4, resolution restrictions, a poor options menu and incomplete player rosters.

PES 2016 PC demo will be released on launch day

Okay, so console players have been able to try out the terrific PES 2016 demo for a couple of weeks now, but at least PC owners will soon get their hands on it too.

It's going to be released on the same day the full game launches, so if you're wondering whether to pick up this year's version, you'll be able to test it out first. 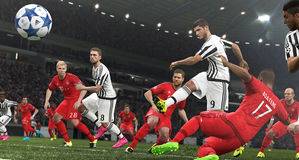