Cliff Bleszinski Announces that Boss Key Productions will be Shutting Down

Cliff Bleszinski has announced the unfortunate news today that Boss Key Productions will be shut down, and work on Radical Heights will no longer continue. Servers will remain up for a little while, although Bleszinski didn't say when they would shut down for good.

New additions flood in as Boss Key gets comfortable

Radical Heights Green Screen - Can it be fixed?

Luckily, the answer is yes - here's how you can solve the most annoying graphical problem in the newest battle royale game, Radical Heights.

Radical Heights Female Characters - What Will They Look Like?

Radical Heights is the newest game from developer Boss Key and the man who made Gears of War a thing, Cliff Bleszinski. Unlike the failure that is LawBreakers, Radical Heights is free-to-play, and most importantly, it’s a Battle Royale game.

The game, in its current form, is still a problem in terms of performance, but that shouldn’t come as surprise since it’s in Early Access and may stay there for quite some time.

Are you looking for the Radical Heights Release Times? Cliffy B and Boss Key Productions will be launching this free Battle Royale game with an 80s vibe on 10th April at 5pm BST. 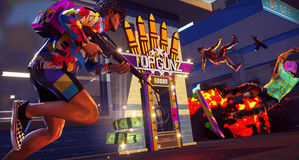