After a long struggle, Strategy Informer emerges from the Rift to give you its verdict...

Rift came out in 2011, and like most MMOs in the post-World of Warcraft boom, eventually went free-to-play. Since the transition in 2013, the game’s gotten a variety of free content updates, but this year will mark the game’s first big paid expansion in three years, with an increased level cap, a bunch of new zones, and all the new content that goes along with that.

MMO Rift gets major new Into the Wilds update

Trion Worlds' free-to-play MMORPG Rift has received its "largest update since launch", adding a new class - the Primalist - as well as several large new zones to explore in the Planetouched Wilds.

"Stolen away from Telara for decades and recovered through the magic of the Infinity Gate," the developer explains, "the Planetouched Wilds have returned, its mysteries now open to all at last. News of the discovery has reached adventurers everywhere, enticing them to venture into the lost lands and experience the wonders within."

A Rift producer's letter posted on the game's official website has revealed that the next expansion for the game, Nightmare Tide, will hit later this year.

The expansion will take place in the Plane of Water, "a realm of nightmares, dreams, madness and danger where you’ll encounter new foes, new allies, and confront plots that threaten the entirety of existence".

MMORPG Rift from Trion Worlds is now available to play for free, which includes all its 16 major updates released to-date. Raids, dungeons, and the new Storm Legion expansion is all completely accessible.

Three special editions have been launched to mark the occasion offering those interesting in paying a significant boost. They range from £14.99 to £75.99.

MMO developer Trion Worlds has closed its San Diego office, shortly after laying off the Defiance dev team and re-forming End of Nations into a MOBA. 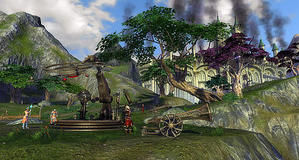