MMORPG Rift from Trion Worlds is now available to play for free, which includes all its 16 major updates released to-date. Raids, dungeons, and the new Storm Legion expansion is all completely accessible.

Three special editions have been launched to mark the occasion offering those interesting in paying a significant boost. They range from £14.99 to £75.99.

With the Rift MMORPG switching from subscription to a free-to-play model, Trion wants to keep population numbers as high as they can. A recent dev livestream has revealed how they plan to do that.

A 3.0 expansion is in the works and it will introduce four new Souls: Support Cleric, Healing Warrior, Tanking Mage and Healing Rogue. More gear customisation and better roles for pets.

As announced back in May, Rift, Trion World's most successful MMO, is now officially free to play, no restrictions on levels or content for registered free players.

Is There A RIFT Forming For Subscription Based MMOs?

With RIFT going free-to-play, is there any future in subscription gaming?

Rift free-to-play this weekend for owners of MMO

Trion Worlds is waving the need for subscription to Rift this weekend as they let anyone who owns a copy of the MMORPG enjoy its fruits for "5 full days" between may 30th and June 3rd. Rift plans to go F2P fulltime.

This is a little treat for the current subscriber populace. Next month the switchover occurs. Soon enough it will be free-to-play for all. Monthly subs are so last MMO-gen. 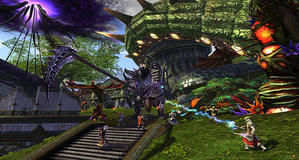