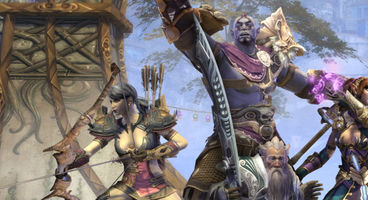 With the Rift MMORPG switching from subscription to a free-to-play model, Trion wants to keep population numbers as high as they can. A recent dev livestream has revealed how they plan to do that.

A 3.0 expansion is in the works and it will introduce four new Souls: Support Cleric, Healing Warrior, Tanking Mage and Healing Rogue. More gear customisation and better roles for pets.

Dimensions are also getting upgraded and Trion is investing more time in making player-owned property more meaningful to Rift. Their next add-on focuses on the 'Plane of Water'.

Some concept art teased a multi-level environment with an underground city beneath a frozen lake. Their previous expansion was Storm Legion and it added two large continents to the game world. Trion doesn't look any less ambitious with their 3.0 expansion plans. The livestream can be watched here.