Recoil Games has announced that Rochard, the puzzle platformer that was released exclusively on PSN on the 27th September, will be landing on Steam next week on the 15th November. The game was and is the first game developed by the indie developer, will be priced at $9.99 USD.

Only On PSN campaign has exclusive title every October week

Sony has launched their Only On PSN campaign for this month which means at least one exclusive digital title for the PlayStation Store every week.

Plus subscribers get 20 percent off the special releases. Eufloria and Rochard are this week's US picks, with Sideway: New York next week. God Hand, anyone?

The first game developed by Recoil Games has been announced, a puzzle platformer called Rochard, which follows the heroic space adventures of astro-miner John Rochard.

The game tests players’ coordination and wits as they use gravity to their advantage, changing it at will to solve environmental puzzles and advance through each level. By using the upgradable G-Lifter, the main tool of the game, players can lift and maneuver heavy objects around the environment, and can eventually swing, jump and propel themselves huge distances throughout each level. 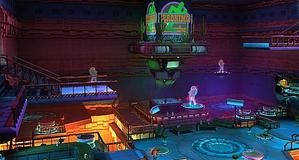