An educational game... wait come back!

Ubisoft's Rocksmith 2014 will support all of the original game's song DLC, which is something this genre overall has a spotty record (pun!) on. Developer Mike Madavi made the revelation during a Q&A video.

Additional news to delight fans is that the original game's cable is also supported by Rocksmith 2014, so no new bit of wire to hook up your guitar with PC or console; recycle the old.

It;s like a thousand wallets cried out in terror, and were suddenly silenced... 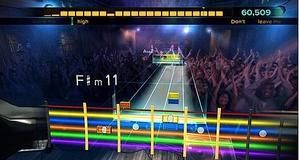