Clear Sky fails to amaze this time around, but does offer a solid shooting experience. Consider it a warm-up for the holiday season, a game to...

While bitComposer is adamant they "hold the license for PC and video games", Eugene Kuchma from GSC claims trademark filings show bitComposer doesn't own rights to make S.T.A.L.K.E.R. games.

The post-apocalyptic world lives on as publisher bitComposer Entertainment has acquired the "exclusive worldwide rights" to the S.T.A.L.K.E.R. license for all "future video game adaptations".

They're excited to now own the "reputable brand" of S.T.A.L.K.E.R. which has sold millions of copies. All other rights for the franchise "remain with the Strugatsky brothers," so no movies. 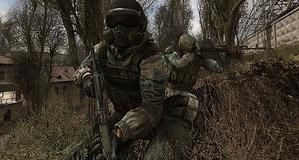