Shootmania Storm combines the creativity of the Trackmania series with a traditional FPS experience, so does it stack up to the competition?.

Ubisoft have announced the release of the ShootMania: Storm "Elite" demo, which features a 3vs. 3 game mode, matchmaking, dedicated rankings and progression levels.

UbiSoft has announced that the do-it-yourself shooter Shootmania Storm is now in open beta, and gamers can download the software from the official site.

Publisher Ubisoft announces that an open beta for ShootMania Storm will be starting up February 12th and will run all the way until launch, which is no longer this month but in early April.

The first-person shooter is based off developer Nadeo's TrackMania series. Storm is the first of three environment-based releases for ShootMania. It uses TrackMania's map editor.

UbiSoft has announced that their do-it-yourself shooter, ShootMania Storm, will be arriving on the 23rd January 2013. 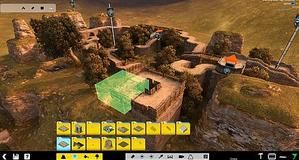