The Full Control-developed Space Hulk games, including Ascension and its DLCs have been delisted from both Steam and Gog.com.

Space Hulk: Ascension has a new expansion, adding yet another classic Space Marine chapter - this time it's the turn of grumpy, secretive space-knights the Dark Angels, or more specifically their elite Terminator squad, the Deathwing, to go around stomping some tyranid heads.

In what is arguably a sad development, Danish development studio Full Control have today announced that they will no longer be developing new games.

The recently released Space Hulk: Ascension Edition will be the last game the developer releases as it downsizes and focuses on community support for its existing titles.

Full Control's Space Hulk: Ascension grows larger today as the Salamanders Expansion releases, which unlocks the Salamander Chapter. This include 20 new story missions, and another 20 flash missions to survive.

The Salamanders board the Space Hulk - Virtue of Hatred - to find pages from the Tome of Fire, or to exact havoc on those who defile them. New environmental challenges lurk in this 3D turn-based strategy.

Full Control has just announced the Salamander Chapter will be available this month for Space Hulk: Ascension. The expansion will add 20 new story missions, and a further 20 flash missions to undertake. 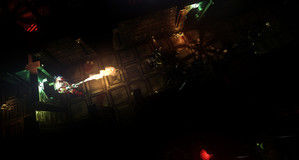