If ever there was a case for using style over substance - it's here..

Independent developer Mimimi Productions has released colourful platformer The Last Tinker: City of Colors on Steam for PC and Mac users. In it players will take on the role of Koru, an acrobatic youngster who "must harness unique abilities to fight the forces of evil and return brightness and vitality to his world." 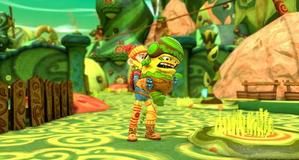