A last-minute reveal by Ubisoft announces Tom Clancy's Ghost Recon Wildlands which has the elite unit focusing on the narcotic empire across Bolivia. It's a military shooter set in a "massive and responsive open world".

It can be played in four-player co-op or solo on PC and console. The Santa Blanca drug cartel is our target which has turned Bolivia into a 'narco-state' with rampant lawlessness. We're there to correct that.

Ubisoft is apparently gearing up to release a bundle of Ghost Recon titles with Advanced Warfighter 1 & 2 and the latest Future Soldier all bunking together in the Ghost Recon Anthology.

That's not all as they also plan for a Washington Edition for Assassin's Creed III, which presumably would include all the Tyranny of King Washington DLC. Both are rumoured for a spring release.

This week's Europhile update to the PlayStation Store has much sought after SEGA Rally Online Arcade, and Red Faction: Armageddon is now all digital. 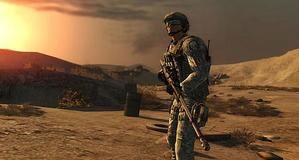