Another console port to PC? Let’s see how Trackmania Turbo shapes up.

If you're into fast cars and veering off a cliff several times in a single race, prepare to get a VR cockpit view of the experience with the Trackmania Turbo VR Update.

Ubisoft has announced that their free-to-play racing construction set TrackMania Turbo will launch on PC, Xbox One and PlayStation 4 on the 25th March, 2016.

The release date for Nadeo's Trackmania Turbo, the latest entry in the worryingly addictive arcade racer series, has been pushed back by publisher Ubisoft to early 2016.

"The Trackmania series has a strong community that’s at the heart of everything that we do," reads a post over on the Ubi blog. "It’s through their comments and various playtests that we have received valuable feedback for Trackmania Turbo. We take that feedback very seriously and we’re committed to ensuring that our fans – both old and new – will always have the best experience possible. With that in mind, we have decided to move the release date of Trackmania Turbo to early 2016." 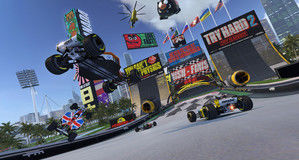