A messianic triumph of beautiful art and sublime game design.

Developer Supergiant Games has revealed that its science fiction action role-playing game Transistor has sold an impressive 600,000 copies since it launched in May last year.

Nothing that's going to change the world, but it's a decent return, and a better one than the studio's previous hit, cult fantasy RPG (with the coolest narration ever) Bastion.

By all accounts the soundtrack to futuristic action game Transistor is something special, so it's pretty cool to hear that developer Supergiant Games has put the whole thing up on YouTube for free.

If you'd rather have your own copy, you can buy both digital and CD versions from the Supergiant web store for $9.99 and $14.99 respectively. 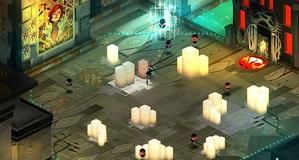