Grand strategy title Victoria II sees players tackling the challenges of industrialization and a world market in between 1836 to the start of 1936.

The latest expansion to Paradix Interactive's Victoria II can now be pre-ordered. Heart of Darkness adds a lot more ways to "grab and hold colonies in the mad scramble for Africa." It releases mid-April.

Select outlets will offer Victoria I Complete to those who pre-order, or 75% off Victoria titles including Victoria II and Victoria II: A House Divided. This add-on also adds International Crises.

Paradox Interactive is cranking up the industrial machine full steam as they announce Heart of Darkness for Victoria II. The team are expanding the issues surrounding colonization, like disputes.

There's also a new naval system with "greater detail in battles," like range of guns etc along with more ship types. We also get international crisis and a newspaper system to 'filter' out events.

Coming to you from the land of Volcanoes and snow. And a lot of meat. 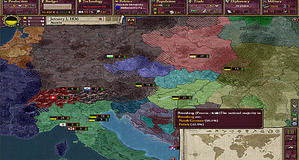