Focus Home date Wargame: AirLand Battle's release May 31st. They also tease the Dynamic Campaign at the heart of the strategy game, which is a follow-up to European Escalation.

Battle groups are dispatched via a theatre map, where you can jump in for real-time conflict. Units are "persistent all along the campaign" and yes, the campaign supports multiplayer.

Eugen Systems has revealed the next free DLC for Wargame: European Escalation.

Fatal Error is the 4th free DLC to be released for Wargame, and instead of adding more content to the muliplayer mode, Eugen have decided to focus on solo play.

The Wargame Cup prepares for battle

The Wargame Cup, the first official tournament of strategy game Wargame European Escalation, is ready to kick off.

Focus promise a "brand new dimension" with AirLand Battle, as they deliver a "leap forward" in visual fidelity with "impressive topography" from satellites. The sequel RTS is due in 2013. 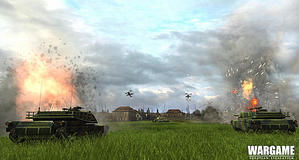