Bilson joined THQ when Vigil's MMO was 18 months in the works, but it played second fiddle to Darksiders. EA's failure to get Warcraft numbers with BioWare's SWTOR was a big factor.

THQ's recent financial struggles have forced the publisher into a position to where it will not have a booth on the show floor. The games will be present for preview, and will be demoed behind closed doors.

Two weeks ago, THQ revealed that Warhammer 40,000: Dark Millennium Online was dropping the "Online" and transitioning into a single player game with a multiplayer community. THQ CEO Danny Bilson has related in an interview some of the thoughts that went behind the decision and some of the results of the change.

THQ has made a startling announcement in an investor report: Warhammer 40,000: Dark Millenium will no longer be an MMO, but a full, retail release single player game, with online multiplayer.

According to THQ CEO Brian Farrell, “As previously announced, we have been actively looking for a business partner for the game as an MMO. However, based on changing market dynamics and the additional investment required to complete the game as an MMO, we believe the right direction for us is to shift the title from an MMO to a premium experience with single and multiplayer gameplay, robust digital content and community features."

Publisher THQ has announced during its investor call that they're "being realistic about our resources" and won't be funding the Warhammer 40k MMO all by themselves.

They want a company to partner with them to share the burden of cost. Darksiders' Vigil Games is making Dark Millenium Online alongside Relic Entertainment. 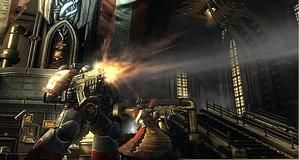