Relic Entertainment and THQ bring the brutal savagery of the Warhammer 40,000 universe back in Dawn of War II.

Warhammer 40k: Dawn of War II - Chaos Rising is now without Microsoft's Games For Windows Live code as the latest PC patch has replaced it with Relic's own 'Battle Servers' for multiplayer.

Leaderboards for Dawn of War II and Chaos Rising are also now separate from each other. These patch has removed three features, such as pausing during an online game. 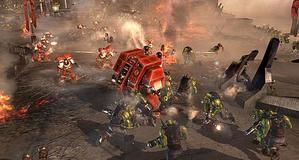