Retribution, the second, final, standalone expansion for Dawn of War II is turning five this month! To celebrate, not only is Relic releasing some new DLC, they’re giving it away for free!

Bilson: Dawn of War 3 is something you've never seen before

Well 1 + 2 does, in fact, equal 3. That's good math. While it's "going back" to the first two on some things it will give us something we "haven't seen before".

Publisher THQ has revealed their financials for the fiscal year now passed and they record a loss of $136.1m, while net sales were in fact stronger at $802.3m.

Q4 '11 didn't perform as well as the previous year's, but Homefront is attributed as their 'primary drive' for success. The new IP has had a "solid start". 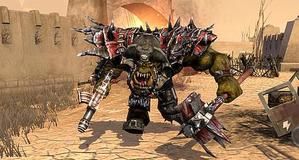