XCOM: Enemy Unknown and its expansion Enemy Within were great reboots to the series for Firaxis and 2K Games. However, for those who can't get enough there are mods and among the modding community for XCOM, Long War is arguably the best. Even Firaxis and 2K seem to know this. They've reached out to Long War Studios to have mods for XCOM 2 ready at launch.

Released in 1995, MicroProse's XCOM: Terror from the Deep is one of the most beloved entries in the long-running strategy series, a deep-sea spin on the alien invasion template that added new challenges, new alien enemies and a cool, vaguely Lovecraftian aesthetic.

It's an entry that fans would like to see developer Firaxis revisit, given their successful reboot of the franchise with XCOM: Enemy Unknown and Enemy Within.

Firaxis 'doubling down' on soldier customisation in XCOM 2, nationality will determine "accented voices"

Naming the brave souls on the frontline battling the alien invasion in XCOM 2 is just the first step in deeper customisation that Firaxis is developing. We can also affect gender and nationality, including voiced accents.

Not every accent will be represented, admitted senior producer Garth DeAngelis, but there'll be a good selection with "more English accents" too. Want a Chinese solider with a thick Scottish bark? Sure!

The 'aliens have taken over the world' premise of XCOM 2 is a pretty cool one, but it does kind of invalidate our hard-earned victories in the first game. In fact, as it turns out, expansion pack XCOM: Enemy Within didn't happen at all.

"It's funny, because we talk about lore in Firaxis games, and the narrative isn't exactly what compels us forwards," Xthe game's senior producer Garth DeAngelis told PC Gamer. "But when we do talk about this timeline, again, it's like Enemy Within never happened. Because you lost. You lost within the first third of the game." 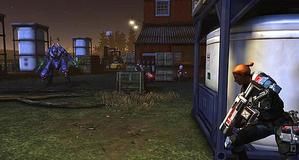