As we thought might happen earlier this week, Rebellion has confirmed a crossover with Valve for its co-op zombie shooter Zombie Army Trilogy.

The cast of Left 4 Dead and L4D2 have been added as playable characters. You can find out exactly how that happened in a free tie-in comic, available here.

Rebellion teases free Zombie Army Trilogy content that may star the heroes of another co-op shooter...

Rebellion is teasing something new that's coming to Zombie Army Trilogy tomorrow, and judging by an accompanying comic that Destructoid managed to track down, it might just be a crossover with a fellow zombie shooter...

The UK-based studis has also released a brief teaser trailer for the new content, revealing that it will be free for owners of the PC version.

Rebellion has announced shooter Zombie Army Trilogy will be coming to PC, Xbox One and PlayStation 4 in early March. It includes Sniper Elite: Nazi Zombie Army 1 and 2, but also Zombie Army 3.

It's a spin-off in the Sniper Elite series where Nazi Germany is overrun with the occult, and the Trilogy includes 8 playable heroes, 12 solo and co-op missions, plus a new horde mode. 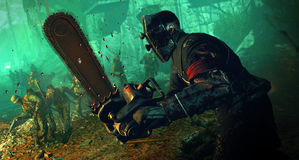