Projectors are an often-difficult proposition, especially for those looking to use them for the purpose of video games. The primary problem, of course, is lag - but beyond that, a projector set up also requires a great deal of consideration of how it’s configured - a lot different to a TV or monitor, where regardless of platform or any other qualifications one can just plop the device down, plug in, and play.

Despite the extra work involved, I’ve long been an advocate of the use of Projectors for gaming so long as you can get a good one. Projectors are plainly significantly more diverse than screens - you can move them around more easily, they can accommodate a variety of viewing sizes and angles - and regardless of if you’re on a PC or a console, they’re now getting easier and easier to set up with each iterative generation of new hardware. 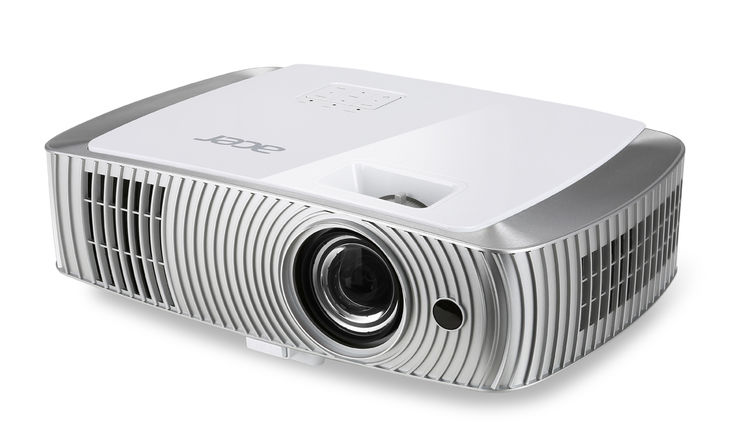 Acer’s H7550ST is one of the models vying for the interest of gamers, packing in a slew of features including full 3D-ready 1080p output with an amount of lag - measured in our tests at around 30 milliseconds - that’s comparable to the TVs and monitors most gamers already use. This isn’t going to quite perform to the ridiculous standards of expensive gaming monitors, but it certainly matches up to TVs from manufacturers like Sony and Samsung.

Able to project a 50-inch screen from as little as just over a meter away, the H7550ST allows for relatively compact operation. Adjusting screen size is as simple as twisting the zoom and focus ring on the front of the unit as you would on a larger-size camera and the quality of the image feels crisp and clear when projected onto a sufficiently flat and white surface. It looks good. 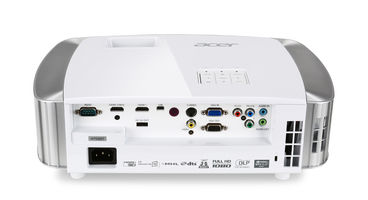 If I had to level a criticism at the quality of the image it’d be for the contrast ratio, but even with that falling a little short of my expectations the images displayed by the projector are nonetheless impressive. Careful tweaking of settings saw initial worries about the colour depth and temperature fade away, but your mileage may vary depending on usage. In terms of response to motion in games the projector performed well, avoiding any nasty blur or tearing happily.

Particularly impressive is the 3D performance of the projector, which in my testing proved to be absolutely gorgeous and without any of the nasty image ghosting that sometimes comes part and parcel with projected 3D solutions. There is a slight catch with 3D in that the projector doesn’t actually ship with the active Acer E4W 3D glasses needed to use it - but if 3D is important to you, shelling out a little extra for a few pairs of those shouldn’t be a particularly taxing proposition. If 3D matters to you, the important thing to know is that the H7550ST’s performance is solid.

In terms of connectivity out of the box, the H7550ST continues to impress, with a solid set of options that’ll see you able to not only hook up your main gaming device via whatever method you choose, but also hook up more than one thing if you so wish. 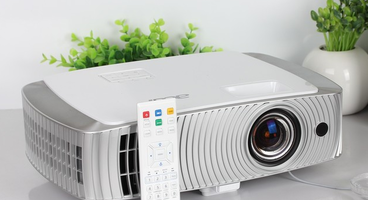 For TV-like use, the Projector also ships with a handy remote.

There’s VGA in and Out slots, two HDMI ports (one MHL), Component and Composite. Similarly there are two 3.5m audio jacks - one in, one out. The audio out proves vital, as the built-in speakers won’t cut it for anything related to consuming high-end media like games, TV or film - you’ll want a headset or external speakers.

One of the cleverer additions is hidden under the hood - an additional HDMI slot inside a small slot in the machine designed for a Chromecast or similar device, complete with micro USB to power it. While I personally wouldn’t get much use out of this, it’s a cunning feature that essentially turns the projector itself into a portable media device in its own right.

On the subject of portability, it is worth noting the unit’s size. It weighs in at a fairly hefty 3.4kg and is some 14 inches wide and 9 and a half inches deep - and while that’s on the larger side compared to some more portable-focused projectors, the feature set and design makes it a worthwhile trade. It’s a good looking thing, too, but perhaps most importantly it runs relatively quiet even when it’s spun up in its most taxing modes.

Projectors still have a great way to go to convince gamers that they’re a viable screen option, but models like the Acer H7550ST are making great leaps towards that. It’s not the cheapest unit in the world, but if you’re in the market for a projector for games and films, this one comes as an easy early recommendation if you’re willing to fork out the cost.

The Acer H7550ST Projector is available now from Currys. Product provided to Game Watcher for Review.