Planet of the Apes: Last Frontier 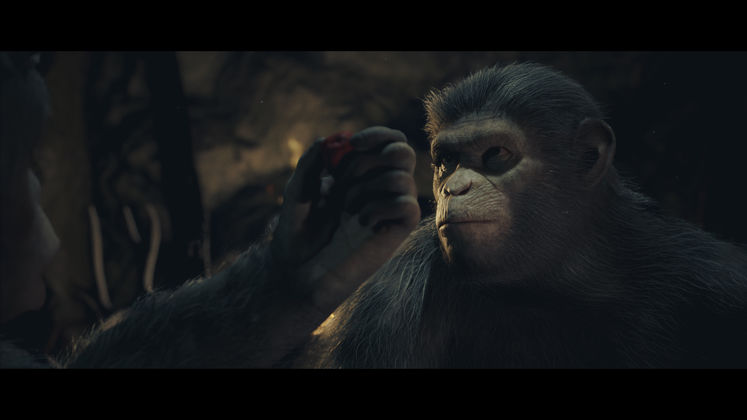 A little while ago we revealed a brand new game based on Planet of the Apes, Last Frontier, set between Dawn of the Planet of the Apes and this year’s War for the Planet of the Apes. We sat down with Martin Alltimes, founder of Imaginati who are developing the game, to discuss taking on such a beloved franchise – and yet an under-represented one, at least in the world of videogames. We discussed story, the movies, choices, the controversial 2-3 hour play-time, influences from Telltale, Quantic Dream and The Godfather… and multiplayer?

Planet of the Apes: Last Frontier is a Telltale-style cinematic adventure game Our review of Telltale’s Batman: The Enemy Within Episode 1 Martin’s been working in videogames for 25 years with the likes of Sony, Disney and Eidos, and after getting disenfranchised with the escalating production schedules and costs (“these games were spending 18 months in pre-production, and we used to make whole games in that time!”) he decided he wanted to leave and start his own studio. After pitching Andy Serkis’ studio the Imaginarium how videogames these days are capable of being just as emotional as films, Martin was given the go-ahead on the videogame arm of the company – Imaginati, made up of veterans and fresh talent. “We’ve got folks with 20 years experience, others with 1-2 years experience… and almost nothing in-between!”

Then it was a matter of a game, and Planet of the Apes seemed a natural fit – with the help of actor and motion capture artist Andy Serkis, who plays Caesar in the movies.

“Andy knew from the previews that Dawn of the Planet of the Apes was going to be a massive hit, so we approached Fox who agreed to give us a chance. At the time though I was the only person there who had made a videogame before! Without Andy’s support we never would’ve been in a position to obtain that licence.” 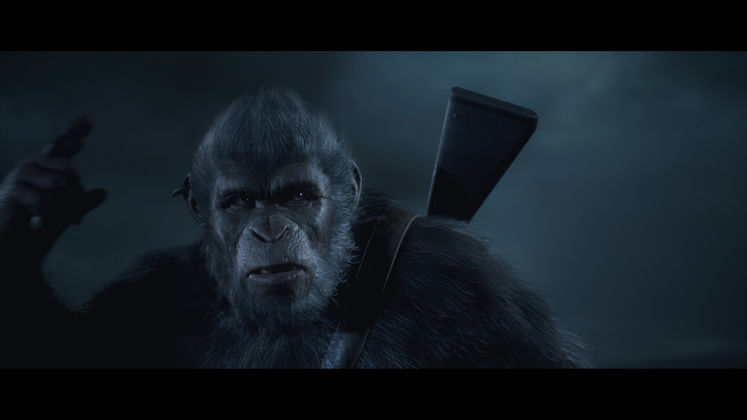 However Serkis is apparently quite hands-off now. “His main area of involvement is helping us understand how to get the best out of performance capture, and how to treat the story and how it connects with the third movie War.”

“The technology that we use in the games is the same they use in movies. The performance capture, the stages, how we track body and facial movements, it’s exactly the same. We probably took enough animation data to cover three or four movies and we shot everything in six weeks… while we might not be able to reach the realism of movie effects what we have is a much more powerful medium when it comes to treating the end results.”

The story, and how you shape it, is what Planet of the Apes: Last Frontier is all about. As Martin explains, the game is set 15 years after the Simian Flu virus wiped out a good portion of humanity, between Dawn of the Planet of the Apes and this year’s War. The Apes that feature in the game supported Koba rather than Andy Serkis’ Caesar, so after Koba was killed they feared reprisals and left the main movie group. They settled 800 miles North-East of San Francisco, deep in the Rocky Mountains, and built a sanctuary there – which is of course threatened by the discovery of humans living nearby.

So why did Imaginati want to get away from the movie characters? The main reason, as Martin told me, was freedom. “We didn’t want to do a direct movie tie-in. If you’re doing a narrative choice-based game, you want to be able to kill characters and you can’t do that with movie characters.” Furthermore, audiences are already aware of Caesar’s ideals, which Imaginati wanted the player to choose for themselves. “Caesar’s philosophy is to avoid conflict. We have to have some sort of ambiguity about the philosophies and motivations of our Apes.” 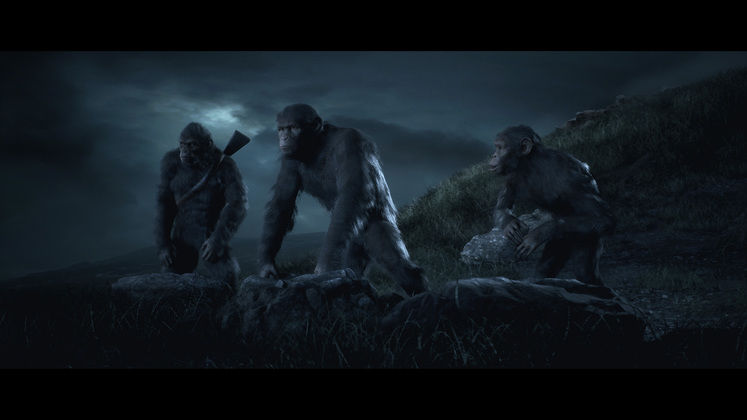 “The Ape tribe is set up like the Corleone family in The Godfather. The leader has three sons. The eldest is the aggressive, impulsive one like Sonny, the middle one is the player character, the younger is a bit like Fredo… but not exactly! The elder brother is hell-bent on annihilating humans, as he believes their mother was killed by humans. The father is more pragmatic. He knows humans are a threat but they can’t win, and he doesn’t want to see any more apes die. What you have are divided philosophies between people of your family. ”

Perhaps just as importantly, the human side are playable too. Martin says that they wanted to make humans playable because if it was just the Apes side you’d identify them as the heroes. Imaginati tried to imagine what sort of humans would be alive after 15 years. These humans are survivors, practical people, raising crops and good with their hands. They’ve got sort of an 1886, Western feel. The husband of the human leader recently died and they don’t know what of, he was the founder and she now has to prove herself.

“The humans can win, the Apes can win, you can find peace, and there are several other endings depending on who lives or dies… The consequences of what you do on one side happens to the other, and how the game plays out.”

Perhaps slightly controversially, Planet of the Apes: New Frontier will only have a general play-time of around 2-3 hours. Martin would like people to play the whole thing in one go, and confirms that this is not the first episode of a series – it’s the whole story. Their stance on this is not only getting everyone to play the whole “cinematic experience”, but to replay it. There are three main endings with seven variations on each. As characters live or die that opens or closes possibilities. 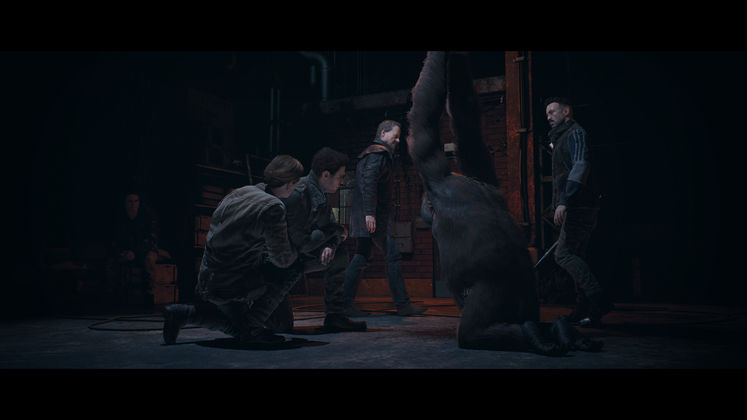 “Most people don’t replay these games if they’re 10-12 hours or more, but if you make an experience that can be completed in one sitting then the chances of going back a few weeks later and trying to see the alternative endings are much higher.” This certainly makes sense to us, but whether it makes sense to audiences probably will depend on the price point the game launches at. Martin also wanted to keep the interface and controls as simple as possible so there would be no barrier for entry.

“The first thing we did was only have two choices, because it’s sometimes even hard to tell the difference between four choices. The second is removing all control over player characters. Beyond accessibility, if you think about what happens in these adventure games there’s a lot of walking around exploring and you’re not sure why you’re doing it.” Certainly one of the biggest criticisms of The Walking Dead concern moments where you’re wandering around in a very small area, which certainly aren’t the bits anyone wants to remember from those games. “The core mechanic of interactive fiction is the choices. By stripping that away we make a more cinematic experience, the pace is faster, everything is moving the story forward.” 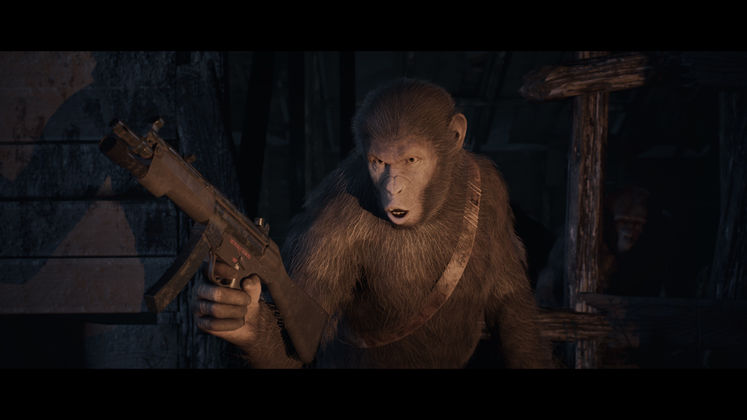 Another thing Imaginati want to avoid are those moments in games like The Walking Dead or Mass Effect when you make a choice and your character says it in a different way than what you expected, and there’s no way of taking it back or any other characters disputing it. In Last Frontier, players will be able to see alternative points of view and change their mind if they want to. “We want to avoid cliff-edge choices. One character will come in and offer a choice, and a second and third character could present a counter-argument. This makes dialogue more realistic but also gives you the chance to change your mind before your final decision.”

Perhaps most shockingly after all that, Planet of the Apes: Last Frontier will feature multiplayer for up to 4 people. How could that possibly work in a game without direct control of the characters? “Players all vote on the choices. This means that anyone in your household can play. We’re trying to move the genre of interactive fiction forward, but we want everyone to play it too.”

On PS4 there will even be an option to use your mobile phone as a controller via Sony Playlink, but sadly that won’t be on PC. Regular controllers will be used on PC and Xbox One for multiplayer. And while there aren’t any Telltale-style QTEs there will be more exciting action scenes with quick choices, and multiplayer adapts accordingly. “We do have action choices, and did look at QTEs but that’s not what our game is about. In multiplayer everyone can still vote but they’ve only got a limited amount of time to do so.” 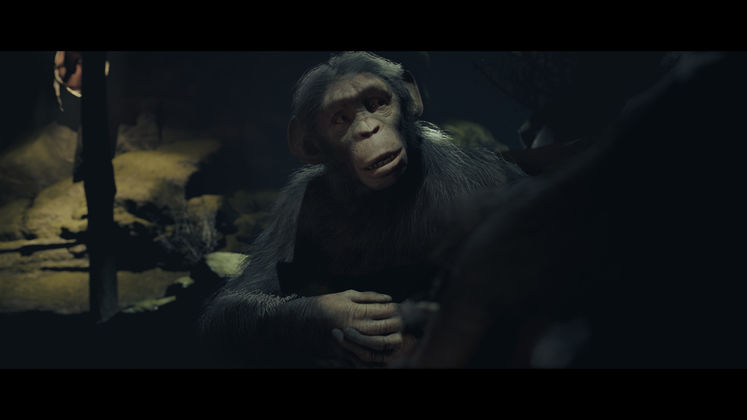 By far the most important thing to Martin and Imaginati though is doing the license justice, and getting over the (perhaps justified) skepticism people have over licensed games.

“What we’re doing I believe is a much more sympathetic way to treat movie IPs. Movie tie-ins are treated skeptically because often there are cynical attempts to crowbar in mechanics or gameplay that didn’t make sense for that franchise. Planet of the Apes is not Transformers! A beat-em-up mechanic would be legitimate in a Transformers game but POTA isn’t about that. There’s action but the reasons and motivations behind why the characters fight is more cerebral.”

While Martin and the team were hugely influenced by Quantic Dream’s Heavy Rain, to the point where they nicked their cinematic director Steve Kniebihly to frame their cinematography, he especially wants to thank Telltale for their work in moving the adventure game to something more mainstream. “No publisher I know of would have greenlit The Walking Dead as an adventure game. Shooting zombies isn’t the reason people engage in that universe. That opened the door to people like ourselves, and it’s great that we have other ways to explore these incredible franchises.” 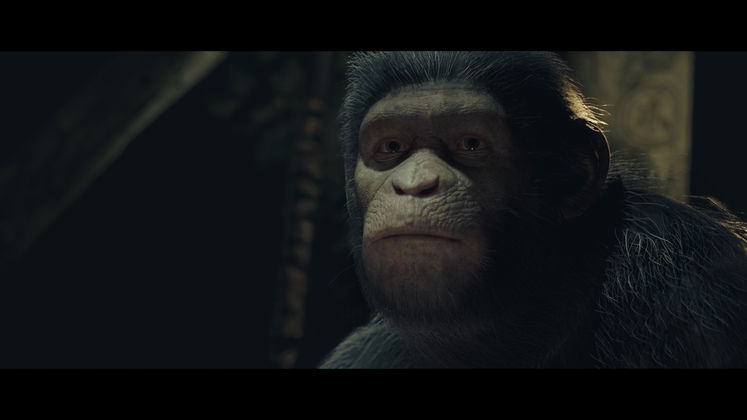 Planet of the Apes: Last Frontier is certainly an interesting experiment in interactive fiction, perhaps the ultimate evolution of the type of adventure Telltale, Quantic Dream, DONTNOD and more have been doing – pure, choice-based gameplay that literally anyone can enjoy. A movie fully in the control of the player (or players!) that can be re-played several times, creating a different experience each time, if you wish. That’s an attractive prospect, and it’s certainly a game you can easily fit in between the latest 30+ hour experiences.

We’ll certainly find out when Planet of the Apes: Last Frontier releases later this year. And that won’t be the only Apes game coming from Imaginati. “We’re also working with Fox on a Planet of the Apes VR experience, due for release next year. We are the go-to guys for monkeys!”

Thanks to Martin Alltimes for taking the time to talk with us. Personally we’d love to see Imaginati to do this style of game with the Alien franchise next. Whoops, you chose left, that character got eviscerated. What a shame. Get on it guys!