We got the chance to sit down with Jason Haber, the producer on Maxis’ new take on the SimCity franchise

23 April 2012 | By Import
We got the chance to sit down with Jason Haber, the producer on Maxis’ new take on the SimCity franchise at an EA event. We took the time to quiz him on the visual aesthetic of the game, money management, and that interesting new way the city feeds back to you.

Strategy Informer: So, first of all – as a big old school SimCity fan, based off this demo – well done.

Strategy Informer: I’m curious. This seems to aesthetically look a little bit like Societies, but is obviously very different – there’s elements of 4, but lots of it feels like the original and 2000 – but where does the majority of the inspiration and the direction for this one come from?

Jason Haber: I think it comes from all of them. I think that’s – of course – the easiest answer is from all of them, sorry. I think our biggest influence is probably SimCity 2000. That was the biggest influence for us, because we felt like that was probably the – really the most accessible SimCity experience. We really wanted to make sure that this entry was that accessible.


With that said, we know what people love about all of the SimCity titles, and we’re trying our best to include all those features, all the best bits from each of the games into this new vision.

Strategy Informer: 2000 had a few of add-on games that linked back into it to see your city in different ways – the helicopter and so on. Is the temptation there to do things like those spin-offs and in 4 where you could get down into the traffic, see the city from different angles?

Jason Haber: [laughs] Yeah. We’re really focused on just kind of finishing the core PC game right now, as that’s quite a big undertaking, so we haven’t really thought about what else we could do with that stuff yet. There’ll be a lot of different ways you can go in and see the little details of your city, so that’ll give you a lot of detail and add to the fun of the simulation.

Strategy Informer: From a money management perspective, can we expect the usual range of caricatured advisors to return and such?

Jason Haber: I think instead of that, instead of advisors per se – and we haven’t really decided about that yet – it’s more about the city itself giving you that feedback. The hope is that you’ll just be able to look at your city and look at the visual data layers you can turn on and off and get the sort of information you need.

In addition to that, you’ll also have Sims in your city. You’ll be able to sort of peer into their thoughts and see what each Sim is thinking about what you’ve done or what they might want. Sometimes Sims may even come to you as Mayor and ask you for what they want, for specific things. From there you can choose to accept or ignore them or just turn them off completely.

Those will all work to sort of give you a little bit of that direction that the advisors did in the past. As for the budget, the budget manager will be a little different in that you can now sort of turn things on and off – decide what you want running in your city.

Rather than just having the Fire Department budget, you can go into a specific Fire Station and turn off that extra garage meaning you won’t have to pay for it or the truck it holds in your budget. That’s the sort of thing where budgets will be managed.

Strategy Informer: In terms of the campaign – or whatever you want to call it – have you thought at all about what sort of things you’ll be going for objective wise?

Jason Haber: Overall, this is still a sandbox game. There’s no direct or right way to play, obviously. As for that more directed gameplay, that sort of thing that you’re talking about will come from your Sims. Also, I think this has actually become more about people actually setting their own goals for themselves. That’s the traditional sort of sandbox gameplay, right?

So I think city specialization really helps there. You can say ‘I want to make a city that provides wind power to the entire region’ – something crazy or silly like that – and there’s no reason you can’t go ahead and do that.

It’ll be interesting to see how those emerge and how much of that happens – how much we provide versus how much we want people to figure out on their own, or the community to come up with on their own... who knows? There’s a lot of different ways we could communicate that to the player, but at the core our priority is making sure the sandbox gameplay is there.

Strategy Informer: The city giving you feedback in the way it does feels like a really radical and different idea. How did you come to that decision of doing things that way over bars and graphs and things like that?

Jason Haber: Really – I’m trying to think of who I’d credit that to most – I’d say probably Ocean Quigley, our Creative Director. He really has been pushing the plausibility of ‘The city tells you the story’, ‘The city gives you the feedback’, ‘no more charts and graphs’. It’s funny that you mention charts and graphs, as that’s exactly the terminology we like to use.

The idea that this city gives you the feedback naturally – he was the core drive behind that, but everybody really was like ‘how can we visualize this in a fun way’ that isn’t just like ‘here, we’re going to give you a number’. I’m really happy with where it’s ended up.

I love some of the stuff we’ve showed today – I love that one shot where the city has no power and then the lights come back up when it’s fixed – it’s sort of one of my favourite views of the city. It’s great because it gives you feedback so quickly, too, so when you’re actually playing it’s great to have it. It makes it so easy to tell what’s going on.


Strategy Informer: I have one more quick question – it’s silly, but I feel I have to ask - have you had much feedback from Mr. Wright about this at all? Has he seen this?

Jason Haber: [laughs] He has! He comes to the office every once in a while. He works very near us, so it’s easy for him to come by. He comes and looks at the game and he’s very excited, he’s really happy to sort of see this new take on how the cities work. We’re good friends with Will! 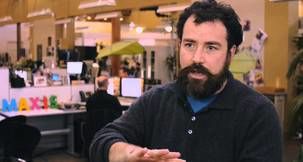 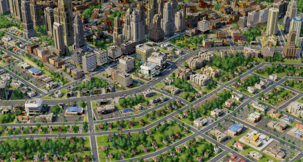