We talk to one of the masterminds behind Sims 3: Generations

19 April 2011 | By Import
Along with our hands on session with the new Sims 3 expansion, we also got to talk to Associate Producer Graham Nardone about this new outing and the franchise in general. Not the most... interesting, of interviews - Graham was very well 'trained' if you get what I mean, but he was a nice guy all the same, and had a lot to say about the specifics of Generations:

Strategy Informer: So, we've got the fourth expansion - Generations, and there's a rumoured 5th expansion on the way, do you think we'll make it to the eight The Sims 2 managed to reach?

Graham Nardone: *Laughs* Well you know, we have this very passionate and they are always interested in new content, but we're not really talking about any future plans today so we'll see where things take us.

Strategy Informer: In each expansion so far, there's been a clear focus on where the new content is going - where is the main focus for content in this expansion?

Graham Nardone: So for Generations it's really about this rich spectrum of life experiences across all the age ranges, and as you dig into the gameplay you find it's more rewarding the more you explore and go along. So for us it was more about getting back to being about the Sims themselves and the way they go through their life and share their experiences with other sims.

Strategy Informer: Each expansion pack up until now has had a new town or location that your Sims can exist in - will Generations be the same?

Graham Nardone: So because Generations is really about the sims themselves and how they experience life, it's kind of exploring their feelings and less about the world around them. Our players have a lot of sims that they are passionate about, so they can bring everything from Generations into the games they're already playing and really experience all that with their current sims. So for our players it was a way to experience that, and for us it about being able to focus our resources back into putting all these cool new features into the game. (Ed: So that's a no, then.)

But of course in the world you're already playing in you'll be able to update that. We have a bunch of new houses, there's this really cool one that looks like the dollhouse kids can play with. You saw the park earlier as well, which is a great place for kids to play in.

Strategy Informer: There's been a lot more information about the younger life stages than there has been about the older ones. Can you expand more about what's new in the young adult, adult and old stages?

Graham Nardone: Well young adults can go on dates now, and it's really fantastic. On all my dates I like to take my sims down to the beach, and we'll have a picnic basket and then they'll start gazing up at the stars. And then of course there's the mid-life crises - what's really great about that is that it gives the player the ability to explore content they may have missed because the sims will really start to reflect on their life and what they've done, and if there's something you haven't been involved with yet the game will push you to get involved and it's very rewarding for the player as well - the player will come out of that with a load of life-time accomplishments and will be able to purchase some of the great stuff there.

Then as you move into being older, it's more about reminiscing about what you've done and the experiences you've had, and not only can you seen them hobbling around on their cane which is really funny, but they're also very proud about what they've done and what they've left behind. So you may see them open the wallet and pictures of the grandkids will spill out, and they'll also talk about the good old days. They also get kind of cranky and don't like being around kids too much so you'll see them waving their cane and stuff.

Strategy Informer: Some of the previous Sims 3 expansions have had similarities to expansions from Sims 2, and Generations itself contains elements from Sims 2: University Life, Teen life etc..., why did you stop at where you are now and not include more of that past content?

Graham Nardone: Well for our players, obviously they are very passionate - we have this huge community out there and they are very vocal about what they want to see. So yeah sometimes we'll take old content and re-do them in brand new ways for The Sims 3. For The Sims 3: Generations, it was a chance for us to work on a theme we'd never explored before, and we're looking forward to see how they react to that, and what they really love about the expansion.

Strategy Informer: Obviously you guys released The Sims: Medieval recently - that in itself came with a number of improvements, like the engine, or how quests work etc... do you think any of these will bleed back into the main franchise?

Graham Nardone: Well Sims: Medieval was a completely different product, and so it's not part of the Sims 3 experience so to speak. For us we have this great talent in the studio, this great pool of developers, and we kind of talk between the teams and share experiences and ideas. So if one team create something amazing you never know it may come across into another game but really we do create unique experiences. So it's about what you get in one game being really different from another.

Strategy Informer: What do you say to criticisms about re-using content? For example, if the rumours about the 5th expansion are true, we're going to see the re-introduction of Pets. Now Pets were introduced half-way through The Sims 2's life-cycle, so one could ask why we'd have to pay to see them introduced again. What do you normally say to that?

Graham Nardone: Well we certainly don't want to punish our players or hold anything back. For The Sims 3 it's this huge game and this all new neighbourhood to explore, which is of course the main difference from The Sims 2, and we're always generating all this content for our fans, and we introduce new stuff as time goes and bring these expansions to our players that we think they will enjoy. Not here to talk about future plans at this point, but there's a lot of opportunity to give back to the community.

Strategy Informer: One of the tricky things about Generations is that the new content is kind of below the surface. In past expansions it was a lot more noticeable what you were getting, so what would you say to people who are a bit too quick to dismiss Generations?

Graham Nardone: Well I'd say it's really about bringing it back to being about your sims (Ed: I'm getting a sense of deja vu...). There's a ton of new content for players who really want to tell the story of their sim's lives, and watching them interact with each other in whole new ways and really experience stuff across the entire age range. So there's a wealth of stuff there. We didn't even talk about the Daycare profession earlier, but that's this new profession you can explore as an active career. Other parents will bring their kids to you, and as you advance in this career problem children start showing up and start causing trouble, and then more and more kids show up and you have to really manage that experience.

Strategy Informer: You've mentioned how you really want to highlight the idea of consequences in this expansion - how far do you want to take that?

Graham Nardone: Really it impacts the sims lives, so it doesn't impact the player directly, but it really allows you to tell the stories that are interesting to you. As a child maybe you get into trouble and get a favourite toy taken away, or put in 'timeout' or even grounded. But the player can get around that, so you can have the kid might sneak out of the house, and this impacts on how the sims feel with their moods and their life.

If you look at dating as well - if you have a girlfriend and you start seeing someone else, and if other people know you are and start seeing you fooling around, these rumours will start to spread about you and you'll get a reputation. At the same time maybe you're a bit of a casa nova and you are able to have these multiple relationships.

Graham Nardone: I can't speak specifically to that, as I didn't work on the Sims 2, so I don't have a background for direct comparison. It's really about exploring the themes that we're interested in giving to the Sims community and responding to what the community wants and providing those experiences for them. So as long as the community enjoys what we put out and responds well to that, we'll keep providing great experiences for them.

Strategy Informer: Ok ,as a final question then - why don't Sims ever turn anything off?

Graham Nardone: *laughs* Well they do, so if a Sim is environmentally conscious or frugal, you'll see them turn off the lights, turn off the TV etc... so if you want your sims to play that way they certainly will.

And there you have it. A lot to take in, and a lot to look forward to it seems. Don't forget to check out our hands-on preview that will be going live along with this interview, and you might want to book the end of May/early June off work, as we feel another Sims binge coming on... 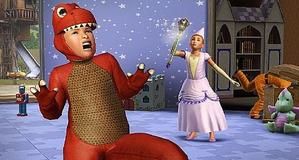