10 June 2008 | By Jamie Davey
The upcoming expansion to World of Warcraft which lets gamers take on the Lich King himself is now also installing private 'trophy' cases.

No more will you have to brag incessantly as instead your statistical achievements can slap down the non-believers of your greatness.

The achievement list can be perused by typing in /achievement in the Alpha test of the Wrath of the Lich King. It's there you'll get a peek at what your life is going to be dedicated to for the next couple of months.

PvP, Arena, Quests, Exploration and the more general or miscellaneous - practically all things will fall under the scrutiny of the achievement system.

World of Warcraft: Wrath of the Lich King is due out the end of this year and will be showcased at the Blizzard Worldwide Invitational this month. 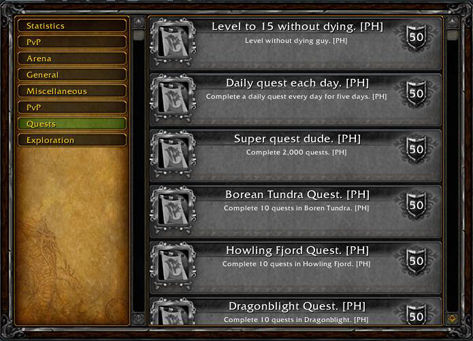