12 February 2008 | By Kres
SouthPeak Games announced this morning that it'll be releasing Roogoo for the Xbox Live Arcade and PC this spring. Developed by Spidermonk Entertainment, Roogoo uses geometric shapes and rotating discs to craft a frenetic puzzle game framed within an imaginative storyline and a fantasy universe. 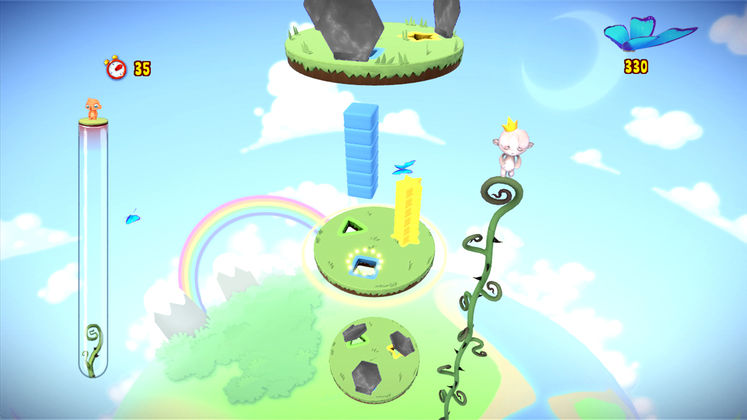 Roogoo tasks players with guiding meteors in the form of shaped blocks though a series of rotating disks as a means of saving the planet Roo and the entire Roogoo race. If aligned correctly, the disks allow the blocks to reach the ground and scores are awarded. However, it’s not as easy as simply rotating the disks to form a neat tunnel. Various obstacles and enemies will impede the blocks’ transit and with the flow of meteor blocks steadily increasing as the game progresses, players will have to think on their feet to save the Roogoo and rack up seriously high scores.

“Roogoo is a rare breed of puzzle game that combines compulsive play with an engaging storyline and a wonderful fantasy world,” said Melanie Mroz, CEO of SouthPeak Games. “With its accessible gameplay, unique charm and high production values, Roogoo is set to carve its own niche when released for Xbox LIVE Arcade and PC. Gamers will definitely have loads of fun mastering its unusual depth and trying to become the guru of Roogoo.”

“We set out to build an addictive, casual game that would be easy to play yet difficult to master,” said Scott March, President at SpiderMonk Entertainment. “SouthPeak gave us the freedom to push the limits of creativity and it resulted in a game that is truly different and has something for everyone. Not only do we have solid gameplay mechanic, but we have added a story element to the experience to really keep players engaged.”

Roogoo will be released for Xbox LIVE Arcade and PC this spring.