12 February 2009 | By Simon Priest
An avid forum dweller at GameFAQs has listed a few summary points from Game Informer’s preview for God of War III, where there's "like 8 pages on it."

Here's the summary list courtesy of GameFAQ's Freakwave003, who has a 'Legend' board user level so, he's like, Jesus or something:

- Unlike God of War 1 and 2 where there are only 15 enemies on screen, there will now be around 50 this time.

- You can ride monsters like the Cyclops and "control".

- They made the weapons "better" so it adds more variety. Like with a different weapon, you don't get just a couple different attacks, but a whole different play style.

- The lion gauntlets are called Cestus.

- Enemy AI's are a lot smarter. Some of the enemies will be "commanders" and control the other grunts.

- Enemies will look different, even if they're the same type. Like, even though the skeleton soldiers are in the same category, they will have varied looks, so it's not like everyone looks the same. 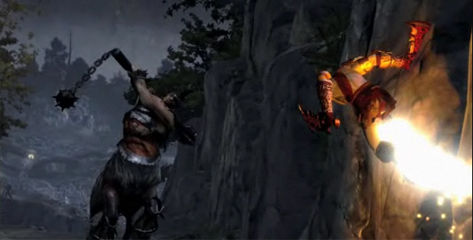