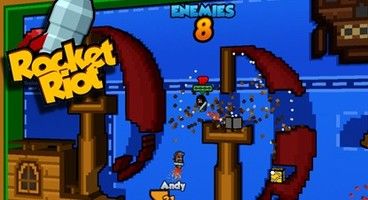 THQ and Codeglue B.V. today announced that Rocket Riot has passed certification for release on the Xbox Live Arcade on June 17th. The game has been priced at 800 MS points.

"We view Xbox LIVE Arcade for Xbox 360 as a natural fit for many of our established casual brands, as well as an opportunity to serve up new gaming content," said Doug Clemmer, senior vice president, THQ. "We're excited to bring a new original title like Rocket Riot to Xbox LIVE Arcade."

"We are very excited to bring our first console game to the Xbox LIVE Arcade platform," said Peter de Jong, CEO, Codeglue "Rocket Riot fits this platform perfectly as it mixes the visuals of classic 8-bit videogames with the power of the Xbox 360, resulting in a visual style never seen before."