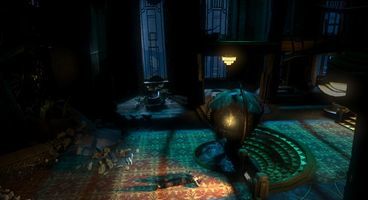 2K Games sends word that the official street date for BioShock 2 on Xbox 360 and PlayStation 3 is 9th February, 2010.

New York, NY - September 18, 2009 - 2K Games announced today that BioShock 2, the highly anticipated sequel to the 2007 Game of the Year, will be available worldwide beginning February 9, 2010. The game is now available for pre-order at participating retailers.

Set approximately 10 years after the events of the original BioShock, the halls of Rapture once again echo with sins of the past. Along the Atlantic coastline, a monster has been snatching little girls and bringing them back to the undersea city of Rapture. Players step into the boots of the most iconic denizen of Rapture, the Big Daddy, as they travel through the decrepit and beautiful fallen city, chasing an unseen foe in search of answers and their own survival.

BioShock 2 is currently in development at 2K Marin in collaboration with 2K Australia, Digital Extremes and 2K China for the Xbox 360 video game and entertainment system from Microsoft, the PlayStation3 computer entertainment system and Games for Windows LIVE. BioShock 2 will be available worldwide on February 9, 2010. This title is not yet rated by the ESRB.