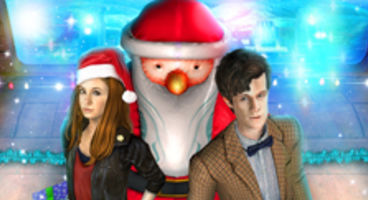 The BBC has announced the fourth and final episode of Doctor Who: The Adventure Games is releasing Christmas Day. It launches after the TV episode.

Shadows of the Vashta Nerada goes live straight after the Doctor Who Christmas special on BBC One. They've gone "all-out" for the season finale.

This seasonal season ender has The Doctor and Amy Pond arrive "just south of London (and about a 1000 miles to the left) inside an aquatic sea-bed colony called Poseidon”, and happens to be at Christmas time - what a coincidence.

“Shadows of the Vashta Nerada takes place entirely underwater – something which would be impossible for the TV series, as water is so expensive. It’s thrilling, terrifying, educational and fun. Just steer clear of those shadows…”

The Adventure Games return in 2011.

Related Games:
Doctor Who: The Adventure Games, Doctor Who: Shadows of the Vashta Nerada