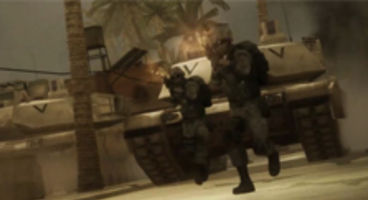 It's a "next-generation free to play Battlefield" with "32-player all out warfare online" where you can "experience the career of a professional soldlier", reads the website. EA already has a F2P Battlefield game called Heroes that launches through the browser.

"We broke new ground in 2009 with the launch of Battlefield Heroes; a game that has 6M registered players worldwide. Now we are complementing that arcade shooter with a core, realistic Battlefield shooter experience that fans have been clamouring for,” said senior producer, James Salt. Play4Free 'combines' Battlefield 2 and Bad Company 2.

"Battlefield Play4Free is for serious shooter fans who are looking for a premium — but free — experience that rivals top console titles.” It uses the “most popular maps” from BF2 and "the familiar classes and powerful weapons” of BFBC2.

Beta sign-ups have begun on the official website with the beta itself scheduled for November 30th, it is believed. Check out the debut trailer for Battlefield Play4Free.