EA and DICE have announced that today for approximately seven hours Xbox 360 Battlefield: Bad Company 2 will be without multiplayer.

It's down for maintenance as they "rebuild" their statistics database. There will be "some minor stats issues" after the downtime but they'll "diminish".

EA CEO John Riccitiello reveals the secret method to "unseat a market leader" like Activision and Call of Duty. You make 'better games in a row'.

Battlefield 3 from EA's DICE looks set to be one of those 'better games' according to Riccitiello. The Frostbite engine it uses is a "class act for FPS."

Battlefield 3 talk at GDC next year

Organisers for the GDC next year have confirmed Swedish studio DICE will be holding a session for Battlefield 3 and it's "technical implementation" of art.

That means fancy engineering talk and pictures of "deferred rendering, HDR" and other stuff. Also on the books is Gears of War 3 and Final Fantasy.

EA has announced the release dates for the first expansion for Battlefield: Bad Company 2.

Vietnam will be landing on December 18th for PC users, and December 21st for the console crowd. 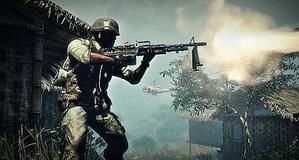