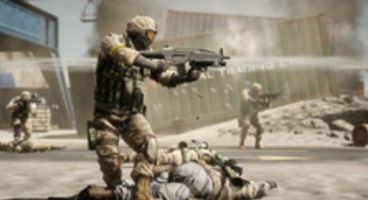 EA CEO John Riccitiello reveals the secret method to "unseat a market leader" like Activision and Call of Duty. You make 'better games in a row'.

Battlefield 3 from EA's DICE looks set to be one of those 'better games' according to Riccitiello. The Frostbite engine it uses is a "class act for FPS."

"If I had to pick the story I'd like to play out next year is we ship a 90 and they ship an 85," mused EA boss John Riccitiello, also noting that both Call of Duty: Black Ops and Battlefield: Bad Company 2 averaged with an 88 Metacritic score.

The Medal of Honor franchise isn't the weapon Riccitiello and EA want to use to lead their assault on Call of Duty - it's Battlefield. "Our next game is being built on the second generation of Frostbite which I think is at least in my opinion is a class act for FPS. I think we're going to lift the game pretty dramatically in the first-person shooter category."

"I have great expectations to do a lot better in 2011 than in 2010 on the strength of a couple of products like Bulletstorm and Crysis, but most importantly for us, Battlefield 3, which I feel incredibly good about," he added. Can Battlefield hurt Call of Duty?