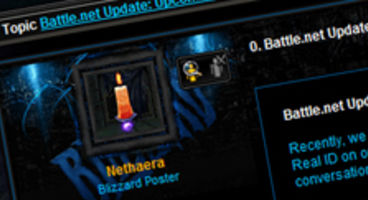 In a bid to stamp out trolls (the forum kind), Blizzard is instituting a 'real name' policy for its Battle.net community boards which includes WoW.

There'll be no more throwing bile into posts behind the iron wall of"anonymity", which should lead to a "more positive" environment say Blizz.

This radical Real ID feature comes into effect for StarCraft II's forums first before it releases in the shops, but will also extend to the World of Warcraft board as well when we "near the launch of Cataclysm", the third expansion to the MMO.

"The official forums have always been a great place to discuss the latest info on our games, offer ideas and suggestions, and share experiences with other players - however, the forums have also earned a reputation as a place where flame wars, trolling, and other unpleasantness run wild," explained Blizzard, reports Eurogamer.

"Removing the veil of anonymity typical to online dialogue will contribute to a more positive forum environment, promote constructive conversations, and connect the Blizzard community in ways they haven’t been connected before."

It has been both welcomed and scorned by the community with related forum topics exploding in the number of replies both pro and con to the new policy.

"Keep in mind that posting is optional, and we recognise that some players will choose not to utilize the Real ID feature in game or post on the forums and support everyone's individual choice on using or not using it," said community manager Nethaera.

Parental controls will be in place to stop children from posting on Blizz forums and thereby spread their name online should they object to the new Real ID system.

"With the launch of the new Battle.net, it's important to us to create a new and different kind of online gaming environment - one that’s highly social, and which provides an ideal place for gamers to form long-lasting, meaningful relationships."

"All of our design decisions surrounding Real ID - including these forum changes - have been made with this goal in mind," said Blizzard.

"As the way gamers interact with one another continues to evolve, our goal is to ensure Battle.net is equipped to handle the ever-changing social-gaming experience for years to come." Using real names in the videogame space is extremely rare.

Of course Facebook has led to the rise of using one's real name as being popular and in fashion for online socialising, so surely this isn't too bad a thing? If it gets those damn trolling flame war hooligans pushed closer to extinction then surely it's great?