Microsoft's "Live Anywhere" concept shown, from PC to cell to 360 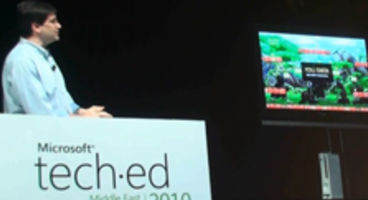 Xbox Live across multiple platforms is Microsoft's dream 'Live Anywhere' idea, and to show us its stuff is Eric Rudder at TechEd Middle East.

A demo of a platform title was shown playing across the Xbox 360, PC and a mobile phone - picking up exactly where he left off seconds ago.

Only 10 percent of the games code was actually changed while the rest remained identical in order to get the platformer title running across these three different devices. Frankly words do it no credit so check out the clip of Rudder's demo below.

It clearly shows he can pick up the game where he left off once he's saved, and with minimal fuss. The mobile phone in the demo is a Windows Phone 7 Series prototype with both an accelerometer and touch controls - fancy.