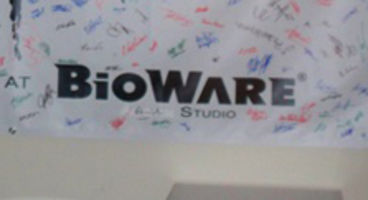 Co-founder Greg Zeschuk of BioWare revealed at Develop in Brighton they have a "small-scale MMO" project, though specifics were guarded.

Console hardware is "the past." We'll see within a year what BioWare is doing to prepare for the future, says Zeschuk. They'll explore "aggressively."

"We’re obviously working on Star Wars: The Old Republic, a big MMO," said Zeschuk, "but we’re working on smaller MMO type game games across the group – things all over the space." The future is definitely one that's online - can't blame the economy anymore.

"We explored lots of different kinds of games. We did some Facebook stuff. We did an iPhone game for Mass Effect. It wasn’t the best one – people point that out to us. We learned the hard way. The learning there was you have to iterate."

"The team went back and made some more games that we never released that were way better. Large scale MMOs. Small scale MMOs. We're going to continue to do triple-A console, but we're also going to be exploring pretty aggressively," he continued.

BioWare is going all-out with Star Wars: The Old Republic MMO ensuring that all characters are voiced and each class has its own 'unique' story arc to follow throughout with no two classes sharing the same NPC quest givers narrative wise.

"The future isn't necessarily on console," Zeschuk said. "That's the past. It's going to be a strong thing going forward, but the future is in all of these new businesses that are starting up." He's likely referring to the likes of OnLive, cloud and mobile platforming.

"There will be some stuff you'll see down the road, within the next year, that shows what we're doing in that regard." The veteran studio is also very busy with Mass Effect 3, more DLC for ME2, and the recently unveiled Dragon Age 2 coming to Xbox 360, PS3 and PC.