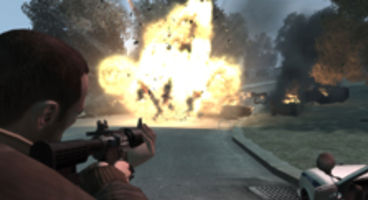 We should expect "some type of teaser" for the latest GTA instalment, with 2011 a good year for it to hit? Divnich reckons so. Exclusivity not likely.

Rockstar has already confirmed that Grand Theft Auto V is in the works but at the time said a huge script will be penned after they've chosen what city they'll have star in it. It'll have enough pages of dialogue and narrative direction likely to punch a hole through a tank if you dropped it from a tall enough building.

"I don't foresee Microsoft or Sony attempting to obtain any type of exclusivity with the next Grand Theft Auto. Microsoft paid a lot of money for exclusivity on the downloadable content for GTA IV, which unfortunately did little to move consoles for Microsoft," he added.

"Back in 2004, the Grand Theft Auto was a huge brand, but only relative to the other brands that existed at the time. While the GTA brand is certainly bigger now than it was five years ago, others have emerged to reach similar levels of success, such as Call of Duty or Guitar Hero." It's no longer the super goliath platform shifter it was.

"In other words, if Sony gets an exclusive deal on GTA V, it would do little to disrupt Microsoft's ability to move hardware, and vice versa." This week Red Dead Redemption hits for Xbox 360 and PS3 , which comes from the offices of Rockstar San Diego.

Later this year Rockstar will also release L.A. Noire and Max Payne 3. A Bully 2 is also rumoured to be in development when composer Shawn Lee said he was busy working on scores for a sequel project. Where do you want GTA V to take us?