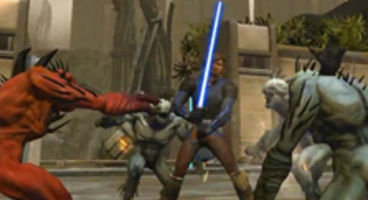 BioWare's Star Wars The Old Republic MMO will employ more of the "traditional" subscription model, but may have "some twists as well."

The publisher needs around 1 million subscribers to the BioWare developer Star Wars MMO in order to break-even, what with the studios huge ambitious scope. Every NPC is to be voiced and all character classes have their own narrative story to play through.

Coming from an EA meeting, analyst Bhatia said that while "earnings are somewhat depressed due to ongoing expenses of the Star Wars MMO, management has high hopes for this and believes 2M+ subs is possible."

Exactly how does BioWare and EA indeed to reap back all that investment? Monthly subscriptions? It seems so but there maybe something else too...

It will "be more of the traditional business model with maybe some twists as well,” said studio boss Ray Muzyka, reports Kotaku.

Avoiding the specifics he added it’ll be "a good value for their money — and feel that there is a way they actually want to engage in the experience, both in how they play it and how they pay for it. That’s our high-level goal.” A lot of media assets have been released.

The PR for Star Wars The Old Republic has been ramped up recently. The BioWare bosses have also teased about the games 'end' period and how they have plans in place to keep veterans interested in exploring the MMO and adventuring.

Does Star Wars The Old Republic make a blip on your gaming radar?