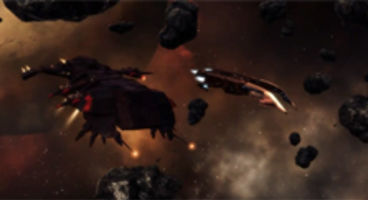 Developer CCP has announced that EVE Online's next expansion called Incursion will be releasing next month for the single-server space-opera MMO.

It features the Sansha nation hell-bent on "instituting its own utopia and exacting vengeance" on interfering pilots. It also improves game performance.

The Incursion expansion "marks a point where our PVE experience moves towards the co-operative roots of EVE and the largest introduction of our Carbon Technology platform to date. Never before have so many players and developers contributed to EVE’s living universe” said CCP senior producer Arnar Gylfason.

Here's what the official press release had to blurb:

Incursion will feature the escalating attacks of the deadly Sansha’s Nation which is bent on instituting its own utopia and exacting vengeance against the pilots who stand in its way. Pilots can join public fleets and co-operate to destroy the Sansha incursions and return the universe to normal, receiving wealthy bounties, earning loyalty rewards and high commendation.

EVE Online®: Incursion will also include many improvements as suggested by the Council of Stellar Management, as well as hardware upgrades, software improvements and new cluster components aimed at increasing game and fleet battle performance to even higher levels.

EVE Gate, the web-based social networking platform for pilots, sees improvements and additions such as new forums which underline the importance of organizational and communication tools in the virtual world. The expansion enhances the power of individual choice in the context of meaningful relationships with other players - EVE's true strength - as highlighted in the Causality trailer and the classic Butterfly Effect trailer.

EVE Online operates on a single-server, creating a single universe for all EVE players to experience which means you're never alone for long. Do you play, videogamer?