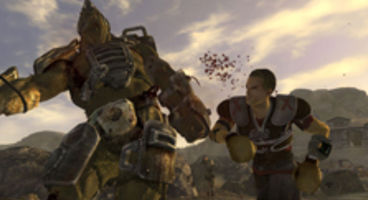 The save bug afflicting Xbox 360 Fallout: New Vegas is "absolutely" being investigated by Bethesda and Obsidian, and other save corruptions.

Right now all they advise is to save often, increasing chances you can fall back on earlier data should you get hit with the bug. It's of "highest priority".

"We are absolutely looking into this bug now, along with other reports of save game corruption," said senior producer Jason Bergman. "It is our highest priority right now that we find out what is causing it. In the meantime, we recommend you save often, and revert to an older save if this occurs." A PC patch already addresses over 200 scripting issues.

It's "in the final stages of testing" and plans to release soon for Xbox 360 and PS3 versions. "We are also pleased to say that we have just released a second fix for PC users to address the autosave and quicksave issues that some people were encountering," continued Bergman. Steam Cloud was causing the problem - it's off now.

"We want everyone to know that we are monitoring the forums and cataloging every single issue we see reported. We're reading forum posts, we're checking Twitter, and we're reading Facebook comments. We aren't able to reply to most threads, but we're listening. If we see an issue, we have people here trying to reproduce it so we can fix it," he said.

What about Doc Mitchell's spinning Exorcist head? Actually that was all Steam's fault for putting out corrupted game files apparently. Verifying game files can fix this particularly hilarious and disturbing quirk of New Vegas. Have you had game troubles?