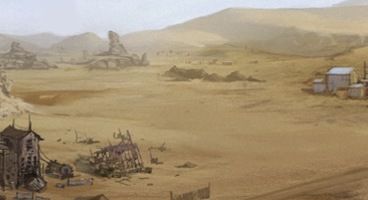 Interplay has promised that the Fallout MMO they are supposed to be developing will be appearing in late 2012.

Of course Interplay is currently in a legal dispute with Bethesda over the rights the MMO. Initially, Bethesda let Interplay keep the rights to develop 'Fallout Online', provided they went into production by a certain date.

In Spring 2009, Bethesda tried to then wrestle control over the MMO game away from Interplay, claiming they hadn't fulfilled the terms of the deal, which of course Interplay are denying.

Despite these claims to the contrary, apart from the odd piece of concept art, we have yet to see any actual in-game screenshots or footage of the game.

"Anything we show will help Bethesda in their fight," Caen claims.

Now, I'm not a legal expert, but I'm pretty sure that when you're accused of not doing something, not showing whatever it is you're supposedly not doing as a counter to such a claim isn't the most foolproof of defences.

We can only hope that more tangible proof emerges sometime between now and 2012.