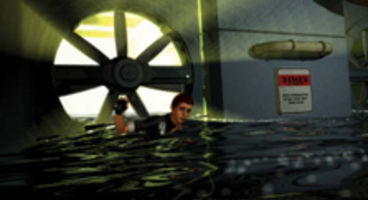 Microsoft nabbed the rights to publish the episodic new franchise. A date for it remains missing in action, as does the word 'episodic'.

That's right that action puzzler Hydrophobia, billed as an XBLA episodic adventure as of last October, may not be going with episodes any longer as the latest press release ditches any mention of it. Though it's happy to scream exclusivity from the rooftops.

Hydrophobia is set in a future where the world's population has exploded and the elite have boarded a large advanced vessel, Queen of the World, to try and figure out a permanent solution to the dilemma. Of course terrorists strike and try to scuttle the ship.

Your role is to work out what the heck is going down, while your very surroundings are doing down around you. Water plays a huge role in the action and puzzles to overcome, with developer Dark Energy boasting it acts naturally.

Check out Hydrophobia's water in action below.