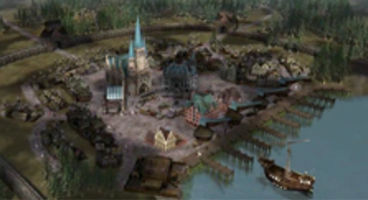 A few strategy franchises have come to the Xbox 360 and PS3, like EA's Commander & Conquer series for example, but Gaming Minds don't appear keen to 'water down' Patrician just to get themselves multiplatform.

"Controlling the game with any kind of pointing devices is not the only aspect for the platform. I think the depth of PIV is slightly too high for playing it in 30-minute time intervals in the living room," said creative director Daniel Dumont, in our interview.

"Additionally, you need a good screen to play a strategy game – resolution, contrast and sharpness. Any PC monitor will do, however a non-HD TV won’t be enough." Patrician has a full simulated economy and involves the player building a trade empire, so that means you need to be able to read the fine print on the screen.

"However, I wouldn’t say that it’s impossible to bring the game to a console – we would have to simplify the gameplay and reduce numbers and buttons though," noted Dumont.

The studio plans to keep long-term support going for the game like "optimization, updates, missions... everything is possible. However, we have to wait to see how the game will perform and what the users are saying." Patrician IV releases exclusively on PC September 7th in the US, and on the 10th in Europe. Check out the latest trailer.