Those crafty European traders are back at it in Patrician IV.

Kalypso has announced Patrician IV: Gold Edition which will include the original Patrician IV and its expansion, Rise of a Dynasty.

Publisher Kalypso Media and online game portal gamigo have unveiled Patrician Online, where fans can play for free through their browser.

It is scheduled to launch next year and is Kalypso's first browser game, with more planned from their "outstanding partnership" with gamigo. 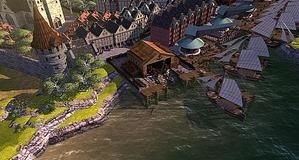