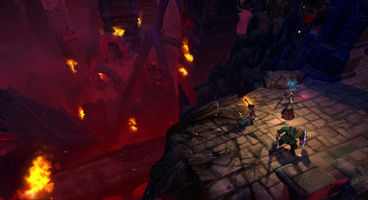 Developer Certain Affinity has announced a new fast-paced co-op action-RPG, Crimson Alliance, in which the player is one of three classes, each with a host of unique abilities.

The Assassin owns time-bending attacks, while the Wizard uses elemental magic, and the Mercenary has a variety of sweeping swings. Each class has five special abilities that can be upgraded by collecting treasure and finding hidden Soul Anchors that harbor the spirits of long dead heroes. By choosing to specialize in certain abilities, players customize characters to suit their play style and complement their friends’ characters. The game features co-op play that allows players to create chain attacks that combine each classes abilities for varied affects.

The game's world of Crimson features crypts, ruined cities, traps and treasures, populated by elite mini-bosses and the devious minions they control. The games three classes each have their own backstory and motives, which are revealed in-game.

"One of the reasons I started Certain Affinity was because I wanted to make a game like this – an action RPG with clever AI, fantastic physics and deep emergent gameplay that can be enjoyed with friends in the living room or halfway across the globe,” stated Certain Affinity’s president Max Hoberman, who worked on such IPs as Halo, Call of Duty and Left 4 Dead, “Crimson Alliance is that game, finally!”

Certain Affinity will be showing off the Xbox Live Arcade game in the Microsoft booth at E3, so we'll have some hands-on time with the game. The game will be released sometime this Summer.