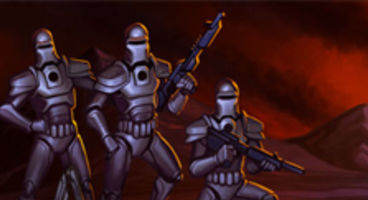 Jay Kyburz of developer Iron Helmet Games has got a new online strategy 'board game' called Jupiter's Folly. He suspects it's "not cheesy enough" in sci-fi.

It was inspired those "super cheesy sci-fi" Micogames from the 1980s. The game is simple: it's a "race to mine crystal fast as you can." Plus there's super soldiers!

"Basically this is another stab at the slow real-time game. We’re calling these games real-time online board games because that how we want them to feel. A small group of friends gathered around a game enjoying some simple mechanics," explained Jay Kyburz.

"Another big influence on me are the classic Micogames from the early 80′s. I had heaps of these as a kid. I still really love the super cheesy sci-fi graphics. I suspect Jupiter’s Folly is not cheesy enough!" he joked. Jupiter's Folly is in beta testing right now.

"Jupiter’s Folly is our next experiment in the real time online board game genre. This time it’s a race. A race to mine crystal fast as you can. The first player to reach their quota wins! To make things interesting players can deploy teams of super soldiers to defend their mines or attack and capture the mines of the other players."

"To keep players on their toes there are also swarms of alien bugs that wander the map looking for something to rip apart. Almost everything you can do in Jupiter’s Folly is expressed as a card. You start the game with a small hand of cards and when you play a card it returns to your hand. As the game progresses you will draw more cards and be able to do more things. The more cards you have the more you can do."

Money is the only manageable resource. "You earn a set amount every 24 hours, but get paid a bonus based on how much crystal you have harvested in the last day. We hope the game will have all the excitement of Neptune’s Pride but not be as quite as intimidating. You don’t “have” to go to war with your neighbours to win. It helps, but its not the only way."

It's got a premium service where you can "buy a key that unlocks all the premium features for a limited time." Iron Helmet aren't fond of subscription services so they don't offer month-to-month billing. Kyburz says they won't be using virtual currency either.

"The whole Internet tells me I should have a virtual currency and charge people for lots and lots of little things. The idea being that some hardcore fans will come along and spend hundreds of dollars buying virtual stuff," he said.

"I don’t like the virtual currency model for a few reasons. …and I could have a big rant here, but lets just say that I just don’t like paying for games that way myself."

The Iron Helmet man even gave his two cents of 2K Games revival of XCOM and their decision to remake it as a shooter. "I think 2k missed an opportunity to create an exciting new IP as they did with Bioshock. I think people would be responding completely differently to the game if 2K was selling it as something new and interesting," explained Kyburz.

"There are ways they could have used to Xcom brand to promote the game without actually calling this very different game the new Xcom. Are the fans being overly hash? I guess because I don’t really care what the game is called as long as it’s interesting and fun."

"But on the other hand, I’m still bitter about what happened to Warhamer 40k in 1993 when they released 2nd edition so I guess they have a point."

For more information about Jupiter's Folly visit the official website.